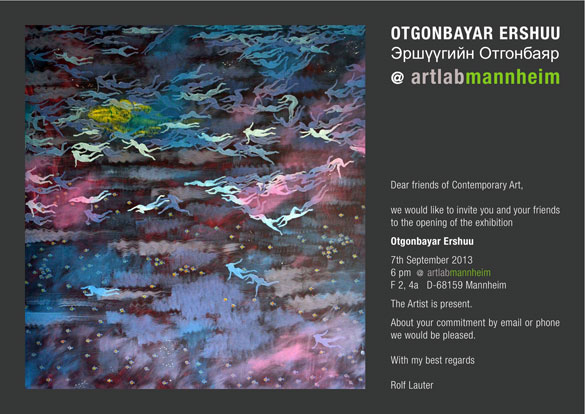 Dear friends of Contemporary Art,
we would like to invite you and your friends to the opening of the exhibition
OTGONBAYAR ERSHUU  7th September 2013 6 pm  @ artlabmannheim F 2, 4a   D-68159 Mannheim   The Artist is present.
About your commitment by email or phone we would be pleased.   With my best regards Rolf Lauter

Otgonbayar Ershuu was born 18th January 1981 in Ulaanbaatar/Mongolia. His great talent for drawing and painting was recognized early and by the age of 15 he had his first solo exhibition. From 1998 to 2001 OTGO studied in Utaanbaatar traditional Mongolian painting. After graduation, he participated as a painter and restorer on several research trips to historical sites in Mongolia. In the Buddhist-Lamaist monasteries he studied different techniques, the iconography of the miniature painting as well as their spiritual backgrounds.

Since 2005 he lives and works in Berlin. 2007-2010 he studied at the Institute for Art in Context, Faculty of Fine Arts, University of Arts in Berlin and graduated in 2010 as Master of Arts. His international exhibitions began in 2001.

OTGO’S first major group of works are the Thangkas, i.e. Miniature paintings whose contents are derived from the gods worlds of Shamanism, Buddhism and Tengriasm, which applies the artist without a sketch directly onto a specially primed canvas. The primer of screens consists of a mixture of carbon black, chalk and milk vodka or brandy. Pigments from minerals or plants are added. Finally, the mixture is bound with glue from Yakskin and applied to both sides of the canvas. Using the special technique developed by OTGO and the state of highest concentration caused about 600 Thangkas. Striking is the mostly eroticized representation of the subjects. A guiding principle of the Mongolian belief is to achieve the “All - unit” by overcoming all of the real world phenomenon.

A second working group consists of approximately 600 pages of comic-like illustrations of the “Secret History of the Mongols” which was written about 800 years ago. It is the oldest and most important literary works of the Mongols, myth, epic and history at the same time. With its miniature illustrations OTGO wanted to do this important work easier to read for all ages of its culture.

“Even as a child I dreamed of colorful, flowers and romping people of lightness and lightheartedness of paradise.” (OTGO)

His third and most recent group of works, starting with the large-scale painting “HUN” (2010-2012), we could entitle as “Paradise Paintings.” “HUN” is an all-over painting of approximately 12000 people and animals interwoven and designed to a condensed panorama-like, vibrant microcosm. Humans and animals are drawn as miniaturelike, individually elements, merge in the picture, however, in a colorful motion-suggestive overall composition similar to a mirror image of the oriented harmony Mongolian culture.

The images presented in Mannheim are showing flying, floating, running humans and animals, isolated and compacted to groups involved in a cosmos of coloristically concise scene set in natural elements. Everything is in motion, change, transformation. OTGOS paintings based on a picturesque expressive language give us an idea of the harmony between man and nature by civilization partially untouched spaces and a feeling of areas of an earthly paradise, which is in some ways consistent with our Western idea of a total harmony or ‘Ganzheit’ of the world. 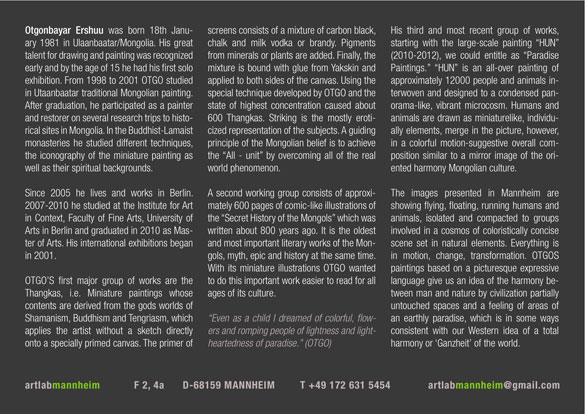