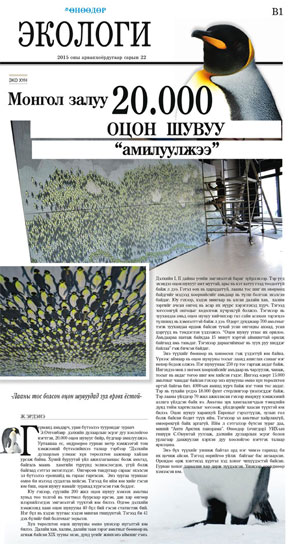 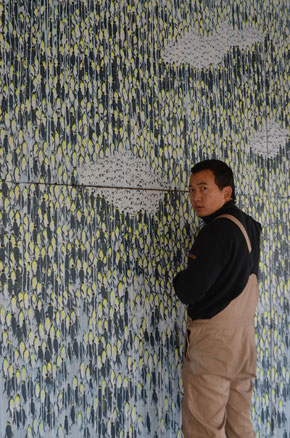 Resurrection of 20. 000 penguins by a young Mongolian

„It is time we light candles to commemorate the many penguins which were slaughtered to make lamp oil.“

The Artist E. Otgonbayar, who is a resident of Germany, raised his voice against global climate change and brought back to life 20 000 penguins with the stroke of his brush.  He comments on his nine meter broad and three meter tall painting: “Climate change causes the extinction of plant and animal species on earth, as the first victims of human misconduct.  However, the existence of humanity is endangered as well; together with the ice, it too, will melt away.  It pains me to see how nature suffers and my Antarctic-Panorama speaks of this pain.

I have largely completed work on this picture, which I started in May 2015.  I had informed myself about climate change rather intensely, but never really intended to paint something like this. The penguins caused me to paint this picture. Their story is so tragic that it can only be depicted in black shades.

In the past two hundred years the population of penguins have decimated dramatically. Statistics tell us that there are only around forty colonies of emperor penguins left worldwide, of which each counts around one hundred to one thousand members.  And so one day I came up with the idea to create another colony of emperor penguins, the forty-first. It would be comprised of 20 000 members.

Humanity has committed great sins against penguins. At the beginning and mid-19th century seals, wales, elephant seals and similar animals were hunted on great scale. The massacres of these animals could almost be compared to the tragedies of the first and second world war. Initially the penguins went unnoticed, for their meat was considered inedible and their skin was too hard for processing. Nevertheless, when man realized that their grease did not congeal, much like that of the common lamp oil, they literally squeezed the poor animals, or they were burned alive for fuel.
The heavy loaded ships carrying thousands of slain seals, wales, etc. consumed vast amounts of coal. Not only was this very expensive, but the coal-fired ships were also much too slow. Firing the furnaces with penguins, not only provided good fuel, but also saved coal. Officers and sailors reported that they burned around 700 animals per day on their ships. One of these reports reads: “The penguins cause a lot of clamor anyway. Whenever we threw one of them into the fire alive, it screamed miserably for about a quarter of an hour until it was dead. Then we threw the next one into the furnace.“
It got even worse when someone came up with the idea to use penguin grease as lamp oil. The Macquarie-Islands mainly processed royal penguins. A royal penguin could deliver 250g of grease. 4.000 animals delivered a ton of grease, which was traded at eight-teen pounds sterling only. As one of the reports reveals the poor animals were driven over a ramp screaming miserably and fell into a cauldron of boiling oil. This is where they were boiled alive. According to reports, this is how 4.000 to 6.000 penguins were used daily. The animals added up to around 150.000 per season for a period of 70 years.  Faced with these numbers we realize the measure of human wrongdoing. Eventually, animal rights activists put an end to these cruelties and the factory was closed in 1918.

This is the true history of penguins which were doomed to light up our dark Europe –as living torches so to say. Like it or not, these animals arouse compassion, one feels the need to help them, do something for them.  The Antarctic-Panorama was created out of this deep compassion. Today, I was invited to a conversation with the Ms. S. Oyuun, a member of the Mongolian parliament.  We will discuss how artists can be heard in the struggle against climate change through their medium of art. I still remember the day when I first read about the fate of the penguins. I was captured by their story and when I suddenly heard some kind of noise behind me I got terribly scared. It was then when I realized that I was crying. I was haunted by nightmares for three nights. It is really such a terribly sad story, the fate of the penguins.”

Translation from German to English by Elisa Kohl-Garrity